To Catch a Killer  緝兇功臣──鑑識科學

Modern forensic science has its roots in China.
現代的鑑識科學起源於中國。 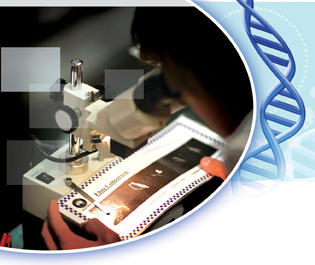 Forensic science is familiar to most viewers of popular TV shows like CSI or Law and Order, but it has always had a role in real police work. Although these days the term suggests high-tech laboratory work, the use of science in law cases has a much longer history.
The word forensics is from Latin, and it means "in front of a forum." Since the Roman legal system used groups of people—forums—as juries, the word came to mean legal proof. Forensic science is therefore science used to prove a legal case. However, the first discussion of forensic techniques comes not from Rome, but from Ancient China.
Around AD 1250, a Chinese doctor called Song Ci put together a book called Collected Cases of Injustice Rectified. It included information on how to examine corpses to find cause of death and gave examples of how the close examination of details helped to solve crimes. The most famous story is that of the sickle murder, in which an investigator solved a murder case by examining the suspects' sharp farming tools. Used for many tasks, such dangerous blades were very common in ancient China. Therefore, their presence alone wasn't enough evidence to identify the murderer. However, on a hot day, flies were attracted to the residual traces of blood on a single weapon, showing who the murderer was.
These days, forensic science uses far more advanced techniques. For example, when a gun is used, ballistics can identify the type of gun and even the individual weapon from the markings on bullets. Song Ci would not recognize the equipment in a modern crime laboratory. Even so, he would recognize the same principles of forensic science—attention to detail and careful scientific analysis—being used to help bring the guilty to justice.

1. Why does the word forensics mean legal proof?
(A) It's rooted in Latin.
(B) Things needed to be proven "in front of groups of people."
(C) Song Ci invented the word in his first book.
(D) Romans changed the meaning of the word to fit in with their culture.