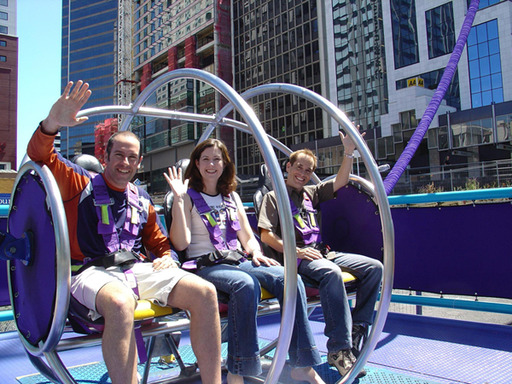 The mechanics of bungee jumping are well known. The jumper, wearing a harness attached to a long, elastic cable, leaps from a platform high above the ground. As the jumper plunges _(1)_, his or her fall is slowed by the springy bungee cable, which causes the jumper to bounce up and down like a yo-yo before being lowered gently to the ground.
A reverse bungee operates on the same principle, but turns it on its head. _(2)_ the bungee jumper starts high, the reverse bungee riders start on a ground-level platform. The riders are strapped into a capsule _(3)_ by elastic cables between two telescopic towers. The capsule is held to the platform by an electromagnetic switch, and the riders lie back and watch the towers _(4)_ higher and higher, which stretches the bungee cords.
When the towers have reached their _(5)_ heights and the cables are at their tightest, the ride operator flips a switch to release the capsule. Like a rocket being launched, the riders and capsule are hurled skyward _(6)_ speeds close to 200km/h before being stopped by the twin bungee cords. Once the trip ends, gravity _(7)_ and the riders fall back down to Earth and are stopped again by the elastic cords before hitting the ground. After a minute or two of bouncing, the riders are lowered towards the ground, shaken, but often wanting another ride.

原來如此
1. As the jumper plunges downward, his or her fall is slowed by the springy bungee cable, ...
理由:
前期其他文章