At the beginning of the 2012 NBA season,many people thought that the players would be tired all the time because they would have to play so many games back to back as a result of the condensed schedule caused by the lockout. Although this has proven to be mostly true, there is a Cinderella story that has caught fire. In case you've been living
under a rock, it should actually be called a Linderella story after Jeremy Lin, the Taiwanese-American point guard for the New York Knicks. Even though Lin was born and raised in America,Taiwan has quickly adopted him as their hero because he represents the never-give-up attitude of many Taiwanese people. Lin went to Harvard and played on their basketball team without a scholarship.Despite getting an economics degree, Lin wouldn't give up his dream of playing in the NBA. He tried out, went undrafted, and pushed himself to make his dreams come true. In 2010, he was signed by the Golden State Warriors but rode the bench most of the season. In 2011, Lin went to the training camp for
the Houston Rockets but was cut before the season started. Shortly after, he was signed by the Knicks but didn't get much playing time at first. Then, two of the Knicks' biggest stars couldn't play, and the coach put Lin in. Lin did so well in his first game that he was promoted to starter, and now, the world has caught Linsanity. He has graced the covers of two consecutive issues of Sports Illustrated and brought Madison Square Garden, the home of the Knicks, back to life. Regardless of what happens next, Jeremy Lin has taught everyone that there is no shortcut to success. 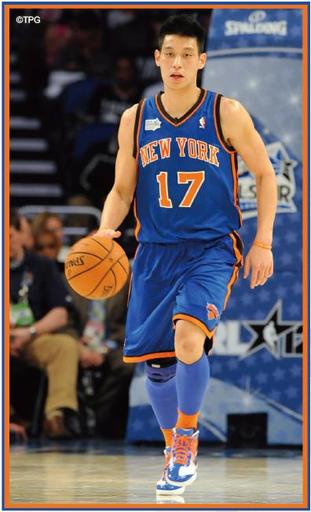