The Scariest Places on Earth

We all know one or two places that are said to be haunted1. They might be an old house that no one lives in or a dark cemetery2. It could even be a famous building or a classroom in your school. However, when it comes to the scariest places in the world, two names keep appearing—the Catacombs3 of Paris and New Orleans, Louisiana. Both have long histories and are favorite places for ghost hunters and people who love mysteries4.

Long ago in Paris, almost all large churches had their own cemeteries inside the city. After years of war, disease, and death, the cemeteries became too crowded and caused health problems. The government tried to fix them with laws, but it didn't work. Finally, a police officer's idea was put into action in 1786, and the cemeteries were emptied. The bones were moved to the quarries5 that stretch for miles under Paris. Over the years, the quarries have become known as the Catacombs. This is because of the piles of bones and the murders6 that took place inside.

Today, visitors can tour the Catacombs. Many have had strange experiences, such as having their hands or clothing grabbed or seeing dark shadows in rooms. Every year, some tours end early because of unexplained7 events that happen during them. 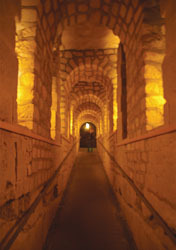