Phineas Taylor (P.T.) Barnum knew how to catch people's eye and make money. His unique museums and traveling shows made him famous. Also, he came up with the three-ring circus, which made circuses more exciting and impressive than ever before.

Barnum was born in Connecticut in 1810 and was named after his grandfather. His father ran an inn1, store, and tailor2 shop while his mother cared for the children. His father died when Barnum was 15 and left the family with nothing.

After his father's death, Barnum used his impressive math skills as a shopkeeper. During that time, he learned how to bargain and how to persuade customers. He was also involved in the lottery3, which was creating excitement across the US. At 19, Barnum married Charity Hallett, and they had four daughters together. At 22, Barnum was locked up for publishing his liberal4 beliefs in the newspaper he started. His interest in politics5 continued throughout his life.

When Barnum looked back on his youth, he admitted that he never liked hard work. Instead, he was more interested in trying to make money from having fun. 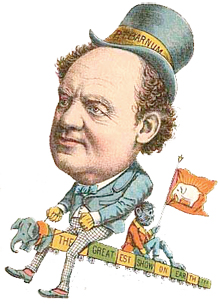