Honoring the Spring and More

@Honoring the Spring and More 象徵重生與希望的復活節

Most of the world knows what Christmas is and the reason it is celebrated. However,Easter, which is observed on a Sunday as early as March 22 or as late as April 25, is probably less understood. For Christians, it is an important time of year. The holiday stresses the fact that Jesus came back to life after he was crucified1 for people's sins. Easter celebrates this resurrection2, which took place some 2,000 years ago.
In fact, Easter was once a pagan3 holiday that celebrated the arrival of spring and honored its goddess4 ─ Eostre. The spring brought warmer weather and new growth in both plants and animals. Thus, the season is often associated with rebirth5. What's more, Eostre's symbol was the rabbit, which represented fertility6 and went on to become the legendary Easter Bunny.
Easter also marks the end of Lent7, which is a period of praying, fasting8, and doing good deeds that lasts for 40 days. It is a time for people to reflect on what they have done and ask for forgiveness as well as focusing on helping others. As you can see, Easter is a celebration of life, death, and so much more. 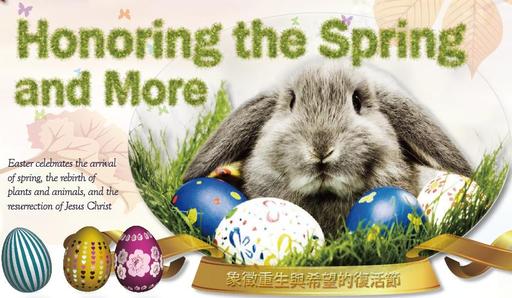