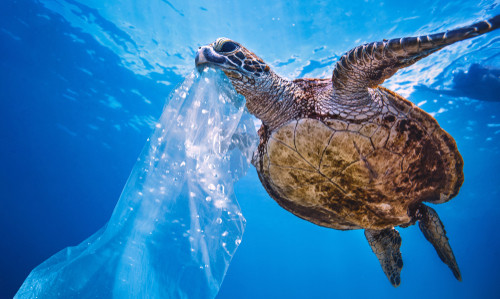 Ford's company, SoulBuffalo, takes corporate executives on epic excursions (Antarctica, Kamchatka, Zimbabwe), smacks a little kumbaya into them, then sends them home fired up about corporate responsibility.
-
SoulBuffalo's previous expeditions have all been for small groups from single companies, but as the scope of the plastics crisis has unfolded (spoiler alert: it's worse than you can possibly imagine), Ford began to wonder if a big, boundary-crossing, experiential intervention could turn the tide. "I've always believed that travel can capture magic in a bottle," he says. "You know how when you travel with people, your relationship can advance years in a matter of days? That's what needs to happen out here."
-
Quarters are tight. Unless you're willing to pay $25,000 for a private stateroom (which a few of the bigwigs are), everyone has to share cabins, and one of the assignments is dropping jaws: the reps from Greenpeace and Nestlé Waters—which have been at war for the past month, after Greenpeace launched a campaign against the bottled-water giant—are bunking in a cramped stateroom with beds three feet apart, at Nestlé Waters' request. ("Haha," Ford initially wrote back. "Very funny.")